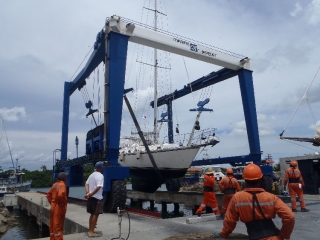 Snowaway was hauled out of the water on Monday May 21 at Shelter Bay Marina. It went very well and we were impressed with the staff. Victor operates the 100 ton lift; he dove into the water to ensure the straps were in the correct place on the hull. The lift is larger than the one in Trinidad and we did not have to remove our fore stay this time. That saved us some time (and cost) in getting ready. Once out of the water, the staff power washed the bottom to remove the slime that had accumulated on its bottom.

They then put Snowaway on a trailer and moved her to the secure dry storage area. In all there were 9 men helping with the process.
Here she will remain for the summer months, having repairs done for the lightning damage.

We are flying home on May 24th. 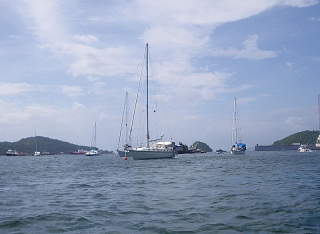 We have done almost all of our provisioning (beer). We have brought on some rum but we are hoping to go to the Angostura Rum and Bitters Distillery tomorrow to complete the provisioning (more rum).
We have enjoyed our stay in Chaguaramas, the last week we have been on a mooring ball. That means whenever we want to do anything off the boat, we need to dinghy to shore. Richard does all the steering but Karen has promised to learn to control Dutchie this season.
We will be checking out of the country on Tuesday and heading north that afternoon. We have not decided on our first stop. Depending on the winds and how we feel, we may bypass the main island of Grenada. That is one of the wonderful things about sailing, one can go were the urge takes one… 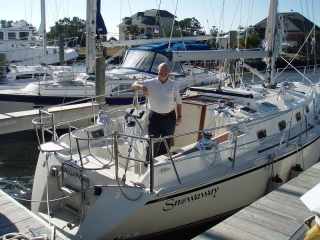 Before we left Calgary we had a “Name that Boat” party.  We had agreed that we would name her one of the top 3 names from the party,  However we wanted to spend some time with her before we chose a name.  We did choose the top “vote getting” name from the party “Snowaway” that was offered by Robert Matheson.  We would like to thank Robert for his catchy name!

The runner-up for the boat name was “Borealis” suggested by Eric Foster, named for the Greek god of the North wind… we think Boreas has been getting even with us because it has been COLD – we had snow flurries several times in November!

We had a local sign designer create our name and it was put on the boat on November 6th.