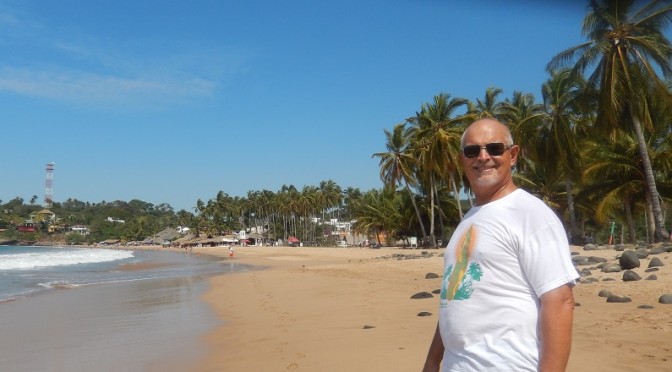 We heard from Steve that he was stuck in Cuba due to high winds and seas and would not make it down to Panama City for the first week of March. He suggested that we do our Plan B for the season and, instead of doing the puddle jump with him, sail into the Sea of Cortez.

So we left Barra de Navidad on Tuesday February 9th before the French Baker arrived in the marina, a great sacrifice from Karen! We had planned on taking about 3 days to sail up to Banderas Bay where we might be visited by Richard’s nephew and his wife in late February. Once we headed north we saw 2 other sailboats going our way. WaveDancer planned to stop in Chamela, like us, but the other boat Cool Change, was going to do a straight shot to La Cruz.

By 1 pm we were all sailing at over 6 knots so the three boats all decided to keep going through the night. Just off of Chamela we were visited by dolphins, always a great time on Snowaway! We had an easy rounding of Cabo Corrientes and anchored by mid morning at Punta de Mita.

After resting up and learning that Richard’s nephew was not going to make it to Puerto Vallarta, we sailed around to Chacala. This was one of our favourite stops when we sailed down on Sol Mate.

We enjoyed a lovely meal at Las Brisas, the same restaurant we had eaten at in 2005. The town has grown up a lot since we were last here!

On February 14th we headed up to Ensenada de Matanchén. Our sailing friends on Airborne, Kathy and Hal, had left their boat on the hard in San Blas for the hurricane season. We had a lovely visit with them.

After visiting the Port Captain and having a tour of the San Blas Fonatur facilities, we had lunch and a stop to view the crocodiles.

On February 16th we headed out with Ann and Dick on Full & By to do the overnight motor sail to Mazatlán. We are currently at dock in Marina Mazatlán preparing boat and crew for the overnight sail to La Paz on the Baja California Peninsula.