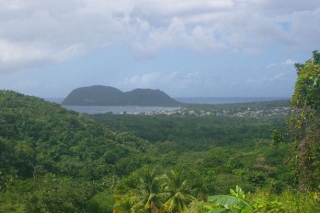 We are in Portsmouth on a mooring ball. Our local guide is Martin Carrierre on Providence. We have used him from our first visit and he gets better each time. He is now like family. We had sent him an email that we were coming and when we arrived we were greeted with fresh grapefruits and flowers.

We arrived with 2 other boats, Kardia and Aphrodite, and he quickly took the captains to customs to check in. Like all the guides in this bay, Martin manages check-ins, garbage and laundry (the most important to me as it is the cheapest I’ve found in the Caribbean!).

Today he took us on a hike up the hill near the bay. We got bay leaves, cinnamon bark, lemon grass, tyme and, of course, coconuts. And we had great views back to the bay. 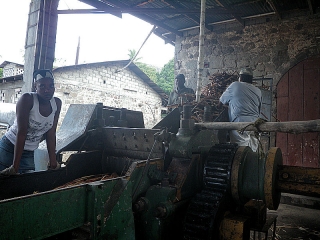 Snowaway left the hurricane hole of Marigot Bay on Saint Lucia and had two brisk day sails of 50 miles each, arriving in Portsmouth on Dominica on December 17. Dominica is among our favourite islands, relatively unspoiled, natural and undeveloped. There are no high-rise, all inclusive resorts here. We picked up a mooring from Martin, a guide we had met in April 2009. Martin said that the tourist season was starting slowly so he was available to take us for an inland tour of the island the following day and for a snorkelling outing two days later.

On our inland tour we visited a bay leaf oil distillery, where the vapours of the leaves are captured and concentrated to create a medicinal tonic. The next stop was the garden of Martin’s friend Stalin, in which we sampled cacoa pods and a citrus fruit called shaddock.

We toured a cold volcano, eminating gases and water which makes the water appear to boil even though it is cool to the touch. We drove around to the Atlantic side to see the Red Rocks (from the iron rich minerals) and had a local style lunch in Callibishie. On the way back to Portsmouth we visited the Hampstead Plantation where Martin taught us how to harvest coconuts. Over the day, Martin showed us much of this beautiful island, of which he is rightly very proud.

We spent an afternoon visiting Fort Shirley in the Cabrits (goat) National Park. They claim that sailors left goats to feed on the island while they were fighting/patrolling the Caribbean. Both the French and the English had forts here; there is a grest view from the top of the hill toward Guadeloupe.

December 22 we will leave Dominica en route to Antigua, where we will spend Christmas.