We had a lovely walk along Grand Anse Beach. It is 2.5 miles long and Richard and I taught Leah our tradition of walking the entire length of the beach, touching the rocks at each end.

We stopped at the west end of the beach for a drink and to watch the finish of the sailboat races that had been going on during the weekend.
Leah’s last day on the island was a tour of the north end of the island. We started at the nutmeg processing plant in Gouyave, the same place that we had gone for the fish fry on Friday night. Then it was off to Sauteurs on the north end of the island for lunch and a visit to the Carib Leap site. Sauteurs means “leapers” in French and in 1651 the French forces tried to capture the native Carib Indians but they leapt to their death rather than surrendering into slavery. 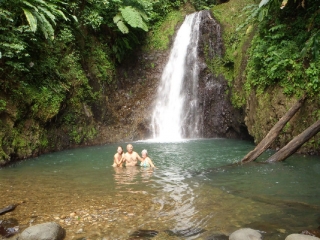 We had a quick stop at Belmont Estates where they process cocoa into the world’s best chocolate. Leah stocked up gifts for friends back home. We had a stop at the River Antoine Rum Distillery which still uses a water wheel to crush the sugar cane. Then it was off to the highlight of the day, a hike to the Seven Sisters Waterfalls. We just went to the first 2 which were pretty special. Leah only had sandals with her and she was hiking in bare feet; thanks Leah for being willing to do that! The dip in the pool was worth the hike!
Leah has now returned to Calgary and the boat seems quiet without her. She was great company, willing crew and never complained about anything. We loved having her. There are more pictures of her visit in the gallery section.
We are now in Port Louis Marina in St George’s waiting for a weather window to head west. We are meeting with 4 other boats tomorrow that have similar plans. I expect we will be heading out mid week. We probably will not have access to internet once we leave Grenada until we get to Bonaire, in about 3 weeks, late Feb or early March. 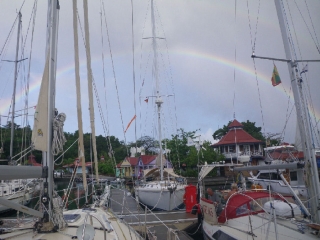