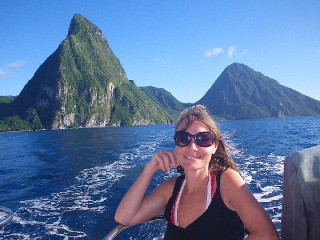 My cousin Erica left us yesterday after spending 2 weeks with us sailing from Grenada, through the Grenadines to St Lucia. We will be here for 2 more days waiting for a good weather window to sail to Martinique. I will be posting notes from her trip over the next day or so; be sure to go back to see the pictures. 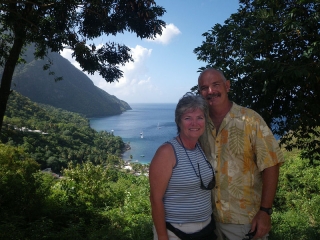 We left St Vincent and planned on sailing to Marigot Bay or Rodney Bay in St Lucia. It was a strenuous beat close to the wind heading up and as we got near land we hailed a fellow cruiser on Broad Reaching to see if he was still in St Lucia. Mark on Kardia responded that he was on a mooring between the Pitons. We were tired so we decided to pick up a mooring ourselves at Jalousie, the bay between the Pitons on St Lucia for a few nights.
The Pitons are volcanic formed mountains that are now a marine park. Petit Piton is 771 m high while Gros Piton is 743 m high. It may seem that the peaks are miss named but Petit Piton is thinner than Gros, hence the names. We took the dinghy to the south wall of the Petit Piton where we snorkelled. We saw many types of fish and coral. One group of about 50 fish of at least 8 different species seemed to be co-operating – feeding on the vegetation on one rock, then just “hangin”, and a couple of minutes later selecting another rock on which to graze… Now I need to get a book so that I can start identifying them. I know we saw parrot fish, trumpet fish, yellow tail snapper, sargent majors. And if I actually take my camera perhaps my brother can help identify them!

On December 8th, Richard’s birthday, we rented a car with fellow Canadians Mark and Velma on Kardia. Mark was willing to drive which was good because they drive on the left side of the road. He didn’t seem to mind when we reminded him “left, left” when he started to drift over the line. The hardest part is when we stopped and then had to re-enter the road. We started at the spa in the Jalousie Plantation, not for a massage but for the great view it gave us of our boat with the Gros Piton in the background.

We then drove to the Sulphur Springs marketed as the “Caribbean’s only drive in volcano”. Nowadays, one has to park outside and walk in with a guide. They used to allow people to go out onto the venting area but one guide Gabriel fell into a vent. He is now a fisherman and the vent is called Gabriel’s Vent! Our guide, Angel. was very informed. She said that they had to do an extensive series of medical tests each year because of the concern of exposure to H2S. I wonder if the Canadian oil industry has talked to these people?

Our next stop was to visit the ScotiaBank and have lunch in Vieux Fort. We tried a local vendor and were disappointed in the ribs and fish. So we continued around the island to the Atlantic side, the windy side, and stopped at Mamiku Gardens, a lovely botanical gardens where they give you walking sticks (means there are some steep trails) and guides to the many plants.

the Atlantic side, we drove through rainforest to Castries, the capital of St Lucia. It is where the cruise ships come but it is the least attractive part of the island.
Our final stop was Marigot Bay where we had a lovely dinner at Cafe Mygo.

We went into the marina at Rodney Bay, St Lucia.  It had easy access and wide slips; no problem docking.  We were thrilled to meet the local entrepreneur with his fruit and vegetable boat!  We had come here as there was a Jazz Festival on; we were surprised to learn that the bands only played on the weekends even though the festival was advertised for the full 10 days.

We explored Fort Rodney on Pigeon Island, which had great views of the bay.  The fort was built by the British admiral George Rodney in the late 1700s. We sailed to the Pitons which are two volcanic mountains rising from the sea, 770 m and 743 m high respectively.  We picked up a mooring ball at Harmony Beach just outside Soufriere and took a cab up to the Ladera Hotel to have lunch and enjoy the view of the Pitons.  The Pitons were named a UNESCO World Heritage Site in 2004.

We left St Lucia on May 8th to sail to St Vincent.  Along the way  we were greeted by dolphins, one of the few times that we have been visited by them on this trip.