We sailed overnight to Samana bay.  Cruise ships stop at Samana so their passengers can go whale watching in this bay where humpback whales nurse their calves.  We spent a few days in the main town of Samana before deciding to see more of the bay.

We sailed across the bay to Los Haitises National Park which Bruce van Sant called the “Bora Bora of the Caribbean”.  There were 4 boats that sailed with us that day and we out sailed them all…the nearest boat to us was Broad Reaching…fortunately we reached the objective bay and stopped the “race” before they could catch us!

We toured into the mangroves in our dinghies to see the caves and pictographs left by the indigenous Taïno.

Pictographs in the Cuevas Ferrocarril (Railway Caves, named such because a railway used to run past the mouth of the caves) show that herons were common in those days as well. 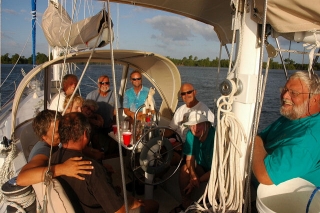