We headed over to the Tobago Cays to spend Christmas. We had planned on going to Petit St Vincent and visit Mopion. Richard wants to have a bottle of beer there. But when we got up the weather looked gloomy so it was off to the Cays instead. We wanted to make sure we had a few good snorkels before the waves affected the visiblity.

We were lucky to get a mooring ball away from the turtle area. The water had amazing colour and we saw lots of fish, turtles, lobsters and even a nurse shark. And we had our Mopion beers on Snowaway…

Erica and I were able to swim/snorkel from the boat to Jamesby Island. It seemed to have a beautiful long beach but once we got there it only took us 5 minutes to walk from end to end twice!
And it was Christmas eve so we decorated the tree and had a nice rum with the boat mascots, Douglas and Rusty.

On Christmas the winds started to pick up so Erica and I went over to Arctic Vixen for cocktails leaving Richard to watch the boat. When we returned Richard had dinner ready: turkey burgers with cranberry cookies and chocolate for dessert.
We hope everyone had a wonderful Christmas! 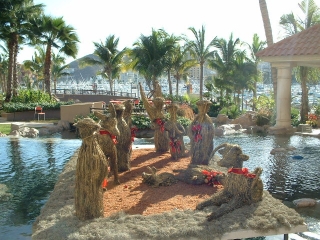 On Christmas day Dick cooked the dorado that he had caught on our way to Cabo for our supper.

All the stores and restaurants were open and we even went to a movie: Alexander the Great. It was in English with Spanish subtitles. The movie itself was too long and too boring for our tastes!

(EDITOR’S NOTE: Alexander has made a number of “worst of” lists, including Roger Ebert. To say it was dreadful is being kind. Pam and I walked out after 60 minutes of painful drivel.)

(EDITOR’S NOTE: Karen made no explanation of this picture! It sort of looks like a marachi band, made of straw figures, but the animal figures make me think it might be a Mexican Nativity scene! Send your guesses!) 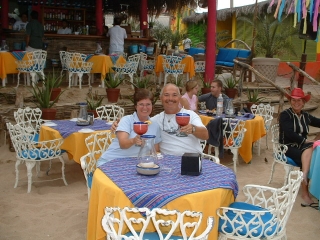 We arrived in Cabo San Lucas on December 21 for Christmas, intending to spend 4 nights, before heading up to La Paz for New Years. We decided to splurge and stay at the marina for our Christmas present to each other (it cost $98 US per night for our boat!).

We enjoyed the town so much we stayed for 6 nights.

We had to visit the “Office”, a bar on the main beach that serves the best strawberry daiquiris (not as big or as strong as we remembered but still good!)