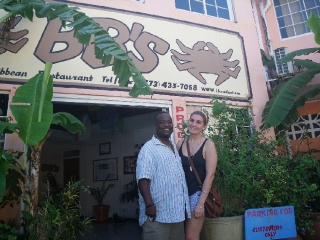 Richard’s daughter Leah arrived on January 16th after spending all day flying from Calgary via Dallas and San Juan, Puerto Rico. We planned on spending a few days exploring Grenada and then sailing in the Grenadines as far north as Bequia before returning to Grenada for her return flights to Calgary on January 31. We were surprised that she arrived on time and with all her bags.
We let her have an easy first day just taking her into St Georges and lunch at BB’s Crabback, our favorite restaurant in Grenada. A tradition there is putting your name and comments on the wall.

The next day we hired David to drive us around the southern half of the island. We stopped at Annandale Falls to see the botanical garden. Leah has just graduated with a degree in biology and we thought she would enjoy seeing the many different plants here. And we had to watch the divers do their stuff…

We had a stop at the Grand Etang Lake, a crater lake about 1000 ft high in the center of the island. As we walked down to the lake we saw about a half dozen monkeys. We had brought bananas with us and they were very aggressive in trying to get them and then very quickly moved into the trees to eat them to prevent other monkeys from getting any. On the way back from the lake the monkeys came looking for more bananas and one actually bit Leah!

We had a stop at the cocoa processing facility where they ferment the beans prior to drying them in the sun. Ladies walk through the trays once an hour to make sure they are evenly dried. If it starts raining the large trays of beans, which roll on tracks, are pushed under cover. Then the dried beans are packed into bags weighing 137.5 pounds.

We hired a taxi driver for the day to show Erica and our fellow cruisers Penny and Ron from Arctic Vixen a few of the sights of Grenada. It is Penny’s birthday today so we wanted to make sure she had a good time.
The rainy season is just coming to an end so the country is lush and green. Our first stop was at the Constantine waterfall just off the side of the road. With all the rain, the roads are often in poor repair but the Chinese government had recently rebuilt the bridge near these falls making our stop easier.

Then it was off to the Annandale waterfalls. We had visited these last year but we were the first group to arrive and the cliff divers were not yet set up. So we had a lovely walk through the gardens.

We hoped to walk around the lake at the Grand Etang National Park. It is in a volcanic crater and we heard it would only take a half hour. Once we got there, the rains had made it too muddy and slippery to attempt. So we walked along the ridge above the lake. The views from there were lovely.

Next was a visit to the nutmeg processing station. Before Hurricane Ivan 140 people worked at this station; we only saw 2 women sorting the nutmegs by hand.
Our final stop of the day was at La Sagesse Nature Centre for a walk along a beautiful beach.
We are now back in Prickly Bay in time to check out of Grenada and prepare for our sail to Union Island in the Grenadines. 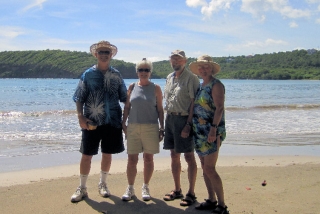 We have spent the last week in Grenada getting to know the country a little better. We took the bus one day from the small town of Woburn (we were anchored just off the town in Clarke’s Court Bay) into St George’s and then onto Grand Anse. Grand Anse is supposed to be the nicest beach on Grenada. It is very pretty, a few miles long and white sand. Many of the beaches here have black sand due to the volcanic origin of the island. We had a delicious lunch of grilled mahi-mahi with mango salsa at Jenny’s Restaurant. Of course that was not what we ordered but as it took an hour to arrive we ate it. The restaurant had a great setting at the end of the beach.

We took a day tour of the island with Cutty. Our first stop was at a private garden where Cutty showed us some of the local fruits, spices and herbs. Then we stopped at the Annandale Falls where we were greated by some local women with baskets of fruit and flowers on their heads. It costs a US dollar to have ones picture taken with them but it was worth it!

The falls were impressive considering there has been a drought here for the last 3 months. The water was cool but the locals like to put on a show for the tourists by jumping into the pool. Ricky was our favorite jumper…

After the falls we drove into the Grand Etang National Park. Cutty had brought some bananas for the residents and they were quite determined to get them!

We stopped to have a tour of the cocoa processing plant. Here is where the cocoa pods are put in sweat boxes, covered with banana leaves and fermented for eight days. Once the beans are ripened they are moved to drying trays out in the sun. Here the staff walk through them twice a day to move them around to help with even drying. If it starts to rain, the trays can be pushed into the buildings. Once fully dried they are put into sacks for export. Some is made into chololate bars by The Grenada Chocolate Company. Unfortunately, the Chocolate Company no longer gives tours…

Then we were off to River Antoine Rum Distillery. We had lunch there before Patty gave us a tour of the distillery. We were too late to see them crushing the sugar cane, they had been doing it in the morning, but we did see the rest of the process. River Antoine has been making rum since 1785 and only makes an overproof white rum with a minimum 75% alcohol content. It makes a great rum punch!

As if that was not a full enough day we then toured the nutmeg processing facility in Grenville. Martin, our guide , was very informative. Grenada had been the second largest producer of nutmeg prior to Hurricane Ivan in September 2004. In those years they produced 6 million pounds of nutmeg per year; now they only produce 600,000 pounds. Nutmeg is covered by mace that needs to be removed prior to drying. The mace takes 3 months to dry, the nutmeg takes 2 months. The nutmeg is placed in trays 3 inches deep and stirred twice a day to help dry and prevent mildew. Once the nutmeg is dried it is placed in water to determine the quality of the nut. The ones that float have less oil and are of lower quality. The nuts are then redried for about 4 days. The high quality nuts are exported as is. The lower quality nuts are sorted again for “looks”, any discoloured ones become quality 3 and are used to make nutmeg oil. The quality 2 nuts are sold but do not command as high a price.

Last night Cutty took several boaters to the Gouyave Friday Night Fish Fry. This is a small town on the western coast of Grenada that is the fishing capital of Grenada. Many locals fry up fish, shrimp, lobster, plantains, breadfruit, etc and sell them at stalls along several streets. A steel drum band entertains as one wanders from stall to stall tasting. Of course there is also beer and rum to try. We had a great meal enjoying the company of our new boating friends, Marlene and Michael from SV Toot.
We are now preparing to sail to Trinidad for our scheduled haul out on April 19th.