As many of you know, Richard and I have taken some well deserved rest time and we’re heading out to explore the West Coast via sailboat.  We are traveling on a 36 foot Catalina sloop named “Sol Mate”.

The first leg of our journey was a few short haul sails around the Gulf Islands, just off the coast of Vancouver,  British Columbia.

Mid-June will see us leaving the calm of the Gulf Islands for the open ocean, and a short journey to San Francisco.

We have a digital camera that will be kept fairly busy, and hopefully we will be able to post pictures here as we continue our journey.We drove to Sydney BC over a couple of days in mid May.

It was fun seeing Stubby, our cat, react to this strange experience…he had never been out of Calgary!  We made sure he had his own “personal floatation device”.

The boat was in pretty good condition when we arrived in Deep Cove (north of Sydney) in mid May.  Often boats get full of mildew and stuff but she was quite clean.  We went to work getting Sol Mate ready to go offshore.

The biggest projects involved safety and keeping things in place if the boat got knocked over.  We added all kind of hardware etc to hold tanks, seats, cushions in place.

We added safety lines on deck, to which the crew is attached with tethers while under way.  Solar panels were added to help top up the batteries.  We added a Voyager wind vane to steer the boat when we are under sail.

Our daily schedule was: work on Sol Mate from breakfast until 2 pm.  Have a late lunch with beers of course.  Buy stuff (hardware, ropes, epoxy, etc) for the projects we would be doing the next day.  You never buy enough of anything!!! 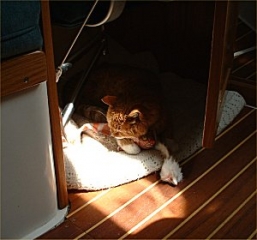 Stubby died (of excitement?) two days before our planned departure, at the ripe old age of 19…150 in people years.  He did NOT receive a burial at sea.