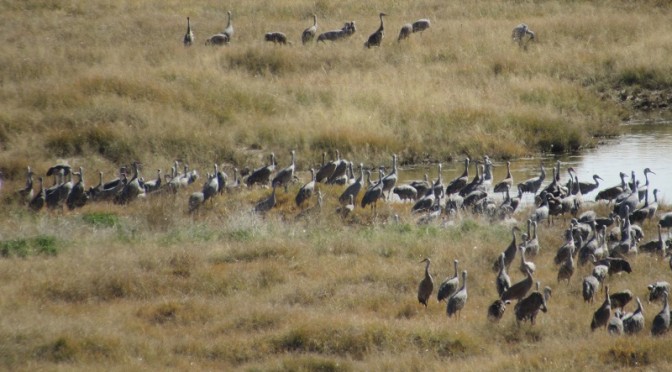 We had chosen our route through the United States to check out some birding sites.

We had read that the sandhill cranes migrate from their summer home in northern Alberta to the Bosque del Apache National Wildlife Refuge to spend the winter. So we decided to find them along their path.

We started in the Maxwell National Wildlife Refuge just over the border from Colorado. We actually saw hundreds of sandhill cranes there. We were so excited to see the big birds eating, flying, and enjoying the water.

We also saw several hawks along the way. 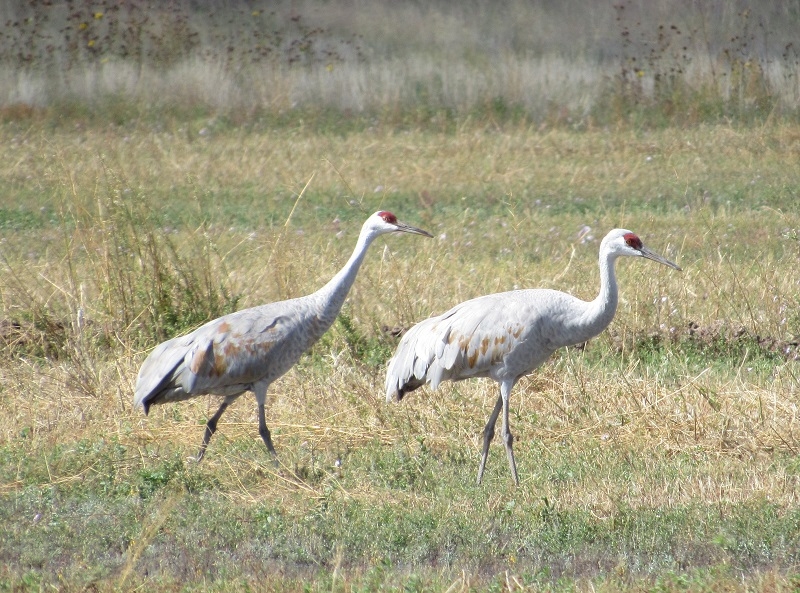 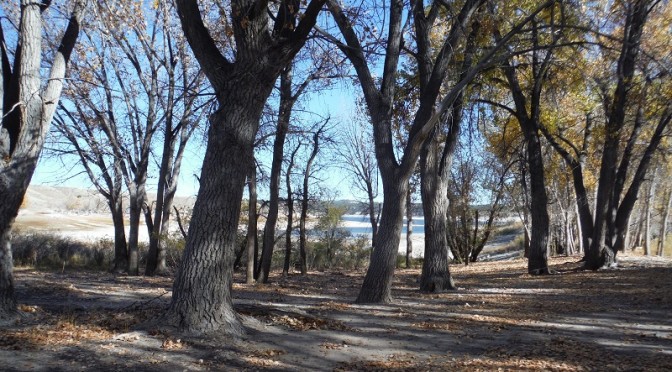 We spend a windy day driving through Wyoming. We believe this US state could be fully powered with “green energy” by installing wind mills. We did not want to drive at the posted speeds as we thought we might be blown off the road!

We had a few stops planning in the hopes of seeing some migrating birds. The first was Edness Wilkins State Park near Casper. The might Missouri River flows by it and we did see our first wild turkeys. But it was windy and cool and we only saw a few northern flickers and a couple of killdeer.

We next stopped at Glendo State Park just south of Douglas. We saw a pair of deer, a gaggle of Canada Geese, several ring-billed gulls and an American White Pelican. We felt like we were back on the Bow River!

We spent the night in Cheyenne, the state capital. It is a lovely city of just 60,000 people. We had a lovely walk in their Lions Park. It has a large lake, Sloans Lake, with easy paths to walk around it. It also had several other areas including a place with this amazing train. Next we are off to Colorado… 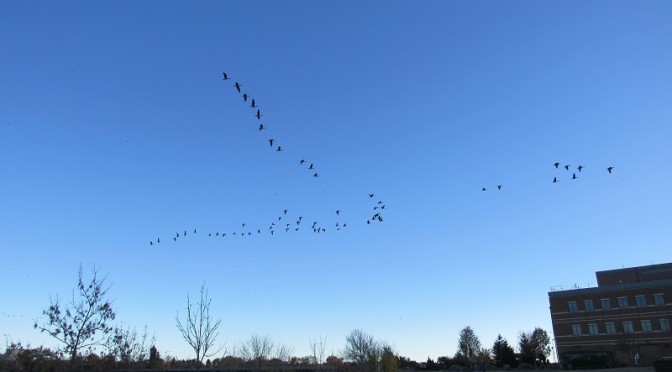 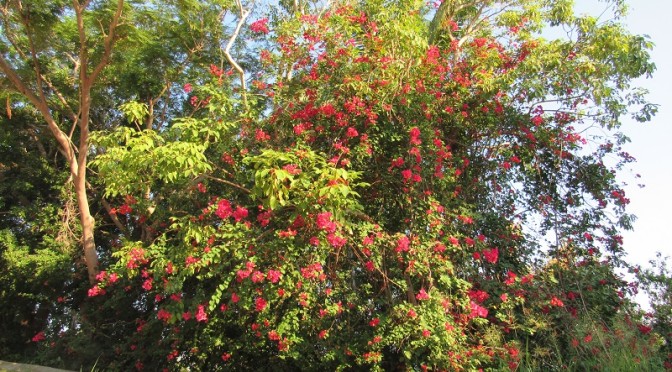 We have settled into a routine; taking a walk usually in the mornings and then going out for lunch. We decided we wanted to go to the Grand Bay once a week to do a walk. We have not seen as many birds as in past years, we are not sure if it is because we are here earlier than usual or if the numbers are truly declining. We were happy to see several groove-billed anis and I got a great picture of one.

We were happy to see that Candace and Norman had arrived back on their boat Kyalami at the marina. As we visited we were entertained by a pair of boxfish. After Richard and I walked over to the Pacific side we met at Sea Masters in Barra de Navidad for a lovely lunch. 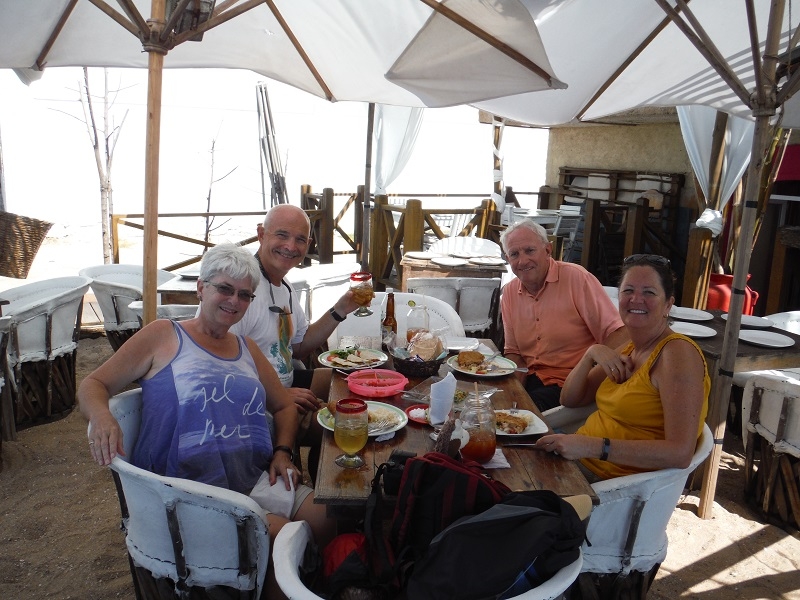 Today was market day in Melaque. We went to buy a few things including legumes (chick peas, lentils).

We were surprised to see a parrot on the overhead power lines. It has been suggested that the parrot had escaped from a nearby cage. But it was great to see a free one! 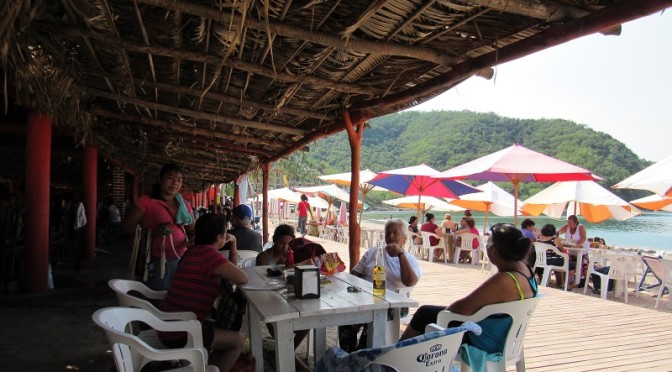 We took a taxi to Cuastecomate today for lunch. It was one of our favourite places to anchor just north of the bay at Navidad. We always went to Ramada El Camaronero for lunch or dinner and we usually were served by Miguel. So it was like old home week when we sat down and Miguel brought us beer and shrimp (of course!). We both ordered the Shrimp a la Cubano but we had forgotten how generous the portions were! 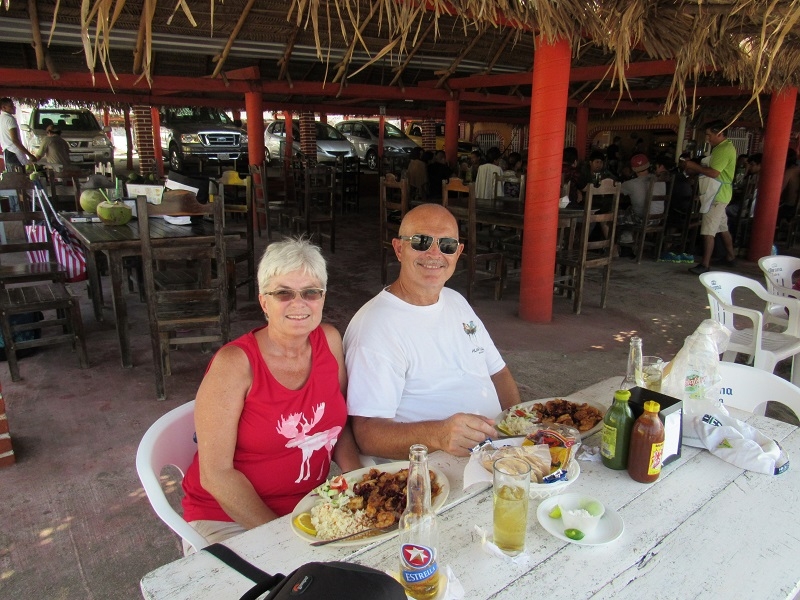 The town has had some improvements over the past year. Most of the roads have been paved and the best addition has been a cellphone tower. The one disadvantage of anchoring here had been no internet access. That has now been rectified!

We walked back to our apartment and stopped at a fruit stand to try out their produce. The pineapples were delicious! 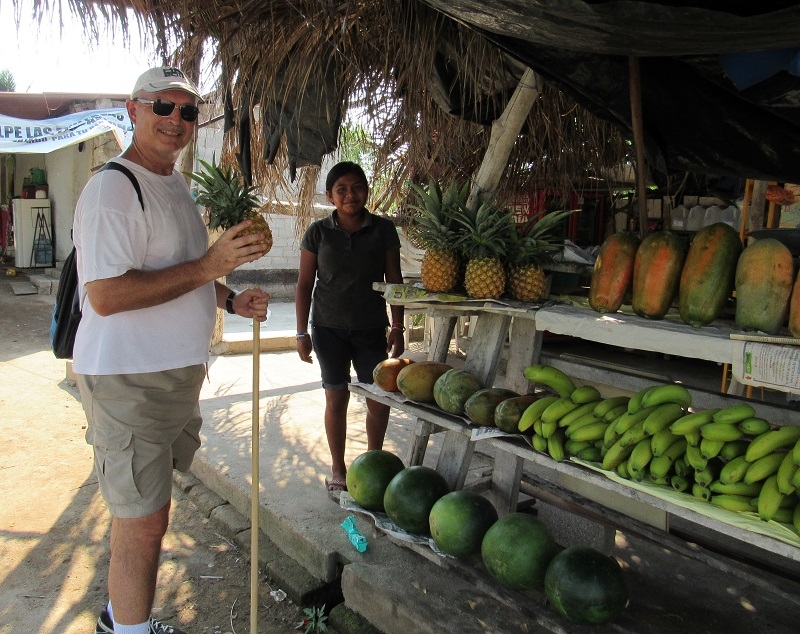