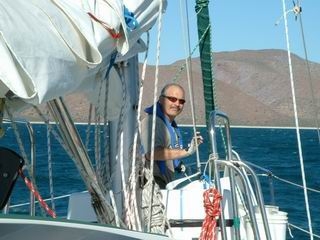 We left San Carlos on November 16. We had great winds from the north, up to 25 kts, perfect for going south! The boat was often going over 7 kts which helped us make the 120 mile crossing in less than a day. Going directly down wind is great as we often only use the genoa, leaving the mainsail down.

We spent the first day in Bahia Salinas on Isla Carmen, a windy anchorage but we were so tired we didn’t even notice!

We spent 2 nights at Agua Verde, a very popular anchorage for sailors where we snorkeled, fed the fishes (Richard trying to catch one) and enjoyed the sun. 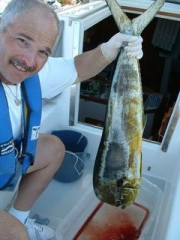 On our sail down to Bahia Gacetaro on Isla San Jose, Richard caught a nice 15 lb Dorado that made a tasty treat.

We sailed from San Jose to El Cardonal on Isla Partida, again a fast sail often reaching 7 kts. The anchorage was a bit windy during the night but we managed to eat the rest of the Dorado!

Next stop is La Paz…