We are currently at the Simpson Bay Marina on the Dutch side of St Martin. The winds are strong and the seas are high so we will be here until February 11 or 12.
We have had some problems with our computer which we hope got resolved yesterday. So look for some new postings over the next few days. 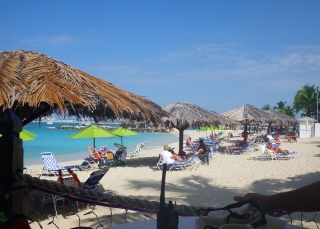 We started preparing to leave St Maarten on March 3rd. We took the laundry in to be done and started provisioning (bringing on more beer and rum…). Richard checked with the marina about taking on water and they told him to bring the big boat into the fuel dock. But the Heineken Regatta starts tomorrow so the dock always seems to be full and there is a line-up… So we had heard a cruiser say one could get water at the Shell station which also has a dock. Richard decided to dinghy over there to fill up our jerry cans. On his first trip while walking back to the dinghy with his first load, he went through the dock, impaling his left chin on some wood splitters. After cleaning it up as best we could, and doing 3 more trips for water, we decided that he should see a doctor. There is a clinic right at the complex by the Simpson Bay Marina and the doctor saw him right away. The doctor now has Richard on antibiotics and wants him to come in on Monday to check that his leg has not gotten infected. At least the Regatta will be on for the weekend giving us something to do while we wait.

We walked over to Topper’s restaurant to have breakfast and watch the start of the racing today. There is very little wind, less than 10 knots and it took the boats quite a while to sail around the marks in Simpson Bay. The staff were very nice to us, refilling our coffee several times and did not rush us out the door. We had stayed at the Pelican resort when we were here 10 years ago and we had forgotten how lovely the beach was. 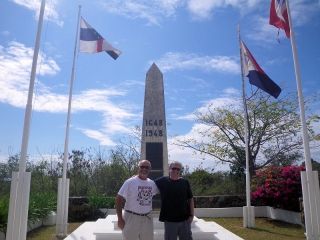 We are currently anchored in Simpson Bay Lagoon. Our friends from Calgary, Jeanne and Tim Gorman, have been visiting us for the past week. They are flying home today so I am sitting at Turtle Pier having a beer while Richard gets them from their hotel.
We spent one day checking out the beaches on the west side of the island. Our first stop was Plum Beach on the French side. It was a great place for a swim before we headed to Maho Bay for lunch. Of course, the planes land over Maho so it was fun trying to get the perfect shot of a plane landing…
We then went to Mullet Bay for some sun and snorkeling. There were a few fish, the most common were the mullets. There were locals actually fishing there and they caught the mullets along the shore; I guess that is why this beach is called Mullet Beach.

We had the Gormans for supper on our boat on night. We had an ulterior motive; we wanted Jeanne to go up the mast to reeve our whisker pole line… We had ordered the whisker pole when we were here in January. It still hasn’t arrived but we are hoping for it to come in this week. We will be in St Maarten until it comes…

We did a day sail, exiting the lagoon on the 11 am bridge opening and sailed to Phillipsburg. We anchored off the main city and had lunch. While we did some reading, Tim tried out the comfort of our settee. We sailed back to Simpson Bay in time for the 5:30 bridge opening back into the lagoon. 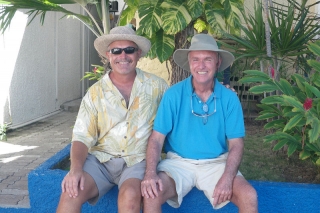 We have arrived in St Maarten after a great sail from Sint Eustatius. We booked into Simpson Bay Marina for a week as we need to have our diesel engine looked at. We have been seeing small air bubbles in our racor filters and when we try to start, we always have to bump up the rpms. The specialist came over yesterday and told us that there was air at the secondary filter which probably causing the hard starting. And he said the air is not normal. Of course, Caliber claims the air is normal and not to worry about it. So now we are not sure what to do….
We were thrilled when we arrived to discover several cruisers here: Mark and Velma on Kardia with whom we had spent several wonderful days with on St Lucia, and Steve on Broad Reaching. We have not seen Steve since the US Virgin islands last April and it was great to catch up with all his news.
Karen twisted her ankle the other night on the way to dinner. So a few days are required for that to mend before we can head off to the Virgin Islands, trying to catch up with Steve again! It will also give us a chance to update the blog. We have got our netbook working again so watch for updates. 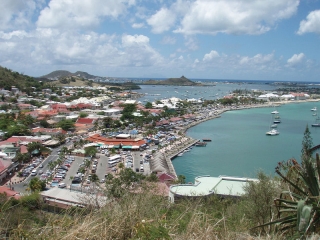 We motor-sailed with Tenace to Sint Maarten.  Actually we sailed to Sint Maarten, the Dutch side, because Richard has Dutch ancestory while Tenace sailed to St Martin, the French side, as they are from Quebec.  The French side has better food and roads but the Dutch side has cheaper everything!  We had to wait one more time for a bridge to open to let us into the bay.  We took a slip at Simpson’s Bay Marina at a cost of $1 per foot per night. 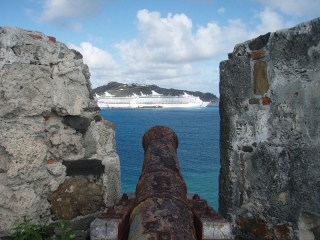 We explored Phillipsburg with the crew of Tenace: Pierre, Monique and Claude.

Claude was flying home on April 9th and wanted to do some duty free shopping before going.  We stopped for lunch along the front street.

We rented a car and drove around the island with Monique and Pierre after Claude left.  One of our stops was Orient Beach, now referred to as Waikiki Beach by the locals.

We met a group of bikers on a cruise; they actually had their bikes on board a cruise ship and toured each of the islands on their own bikes!  We also did some grocery shopping.  Richard found a pineapple for 9 euros!  We thought it was a bit pricy but we both agreed that it was the best pineapple we ever had!

It is now April 12th and we are ready to leave Sint Maarten and head to St Kitts.