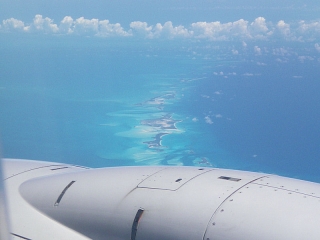 We had the boat hauled on April 19th and quickly put it to bed. On April 22nd we flew to Houston. Richard was then going to fly Ft Lauderdale to visit our sailing friend Steve from Broad Reaching. An hour and a half into the flight a passenger had a seizure. So we got diverted to Miami. It wasn’t all bad because we got great views of the islands on the way there, especially the Bahamas. Of course Customs at Miami were not very helpful; they kept us on the ground for almost 2 hours and would not allow anyone to get off nor would they allow any supplies including water to be put onboard. There was a water shortage in Trinidad and not all the water Continental wanted got put on when we left Trinidad. That meant we had to drink beer on the flight to Houston. It also meant that Richard missed his flight to Florida! Again there is always some good in all events. We got to visit with Dave and Ilse, well we saw Dave for about 5 minutes as he works for BP and had to go help with the blowout in the Gulf. But we got to have a lovely visit with Ilse and her youngest child Katrina.

Richard found a flight for the morning of the next day so Ilse and I drove him to the airport during rush hour traffic… fun… We decided to visit Spring, just north of Houston but we got there before the stores opened. The lady in the Tourist Information booth suggested that we visit the “National Museum of Funeral History”. We thought that nobody that we know has ever visited that museum so it had to be done. It was very interesting and I think I have finally found a way to take my money with me. Just look at this coffin inlaid with real American coins and bills!! The museum was interesting; it had lots of classic vehicles used for funerals, discussed several presidential and papal funerals, it even showed how modern embalming started. Okay, so it may be a bit morbid but it was also interesting. We did spend the afternoon at Spring enjoying the many stores, especially the pet bakery (Brownie loved the “bacon pupcake”, the turducken, and the cheesy love cookie). 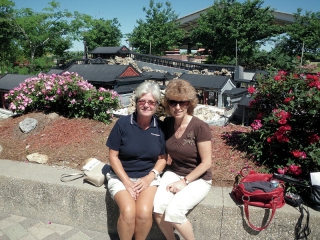 We spent a wonderful afternoon at the Forbidden Gardens in Katy. It was created by a naturalized American from Hong Kong to help promote knowledge of Chinese history and culture. There are two main exhibits: the first shows the Terra Cotta Army of the first emperor Qin. The statutes are exact replicas (1/3rd the size) of those found in Xi’an in Shaanxi province. The second exhibit is a replica of the Forbidden City found in the centre of Beijing. The guide was very informative and if I am unable to see the real thing, I learned a lot about Chinese culture.
Richard arrived back in Houston on April 26th and we spent the evening catching up with Terri and Eric. We flew back to Calgary the next day in time to do income tax before the deadline of April 30th, 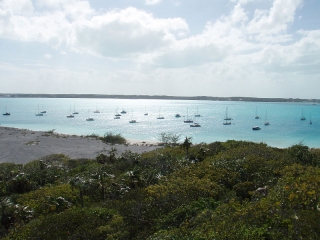 We ended up spending 2 weeks in GeorgeTown waiting for a weather window. We did not enjoy our stay that much. Although the area is beautiful, the winds were strong and we spent many days nights on anchor watch as the winds clocked. We found that the anchoring technique of many were sadly lacking and several boats anchored too close for the conditions. It also surprised us at how often sailors lost their dinghies. Dinghies are our lifeline to shore and how one could not adequately secure it to one’s boat or shore surprises us!

We did explore Stocking Island which is on the east side of Elizabeth Harbour. We anchored at a beach known as Monument Beach due to the large monument at the top of the hill. Of course we had to hike up to see it.

The one nice thing about our stay in Georgetown was the number of cruisers that we met that planned on sailing south. By the time we were able to leave, there were about 20 boats ready to leave. 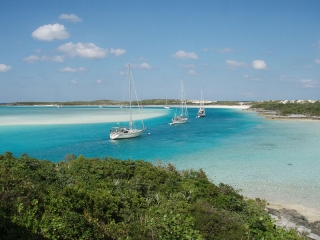 We sailed down to the Exuma Cays Land and Sea Park on January 23rd.  We are surprised at how cool it has been.  Karen has not been out of her jeans in several days and even Richard was starting to feel the cold.

We were very fortunate to get a mooring ball at the north end of Warderick Wells Cay in the Exuma Cays Land and Sea Park.  We had the ball right in front of the park office and spent two days exploring the cay on land.  Snowaway is the closest boat. 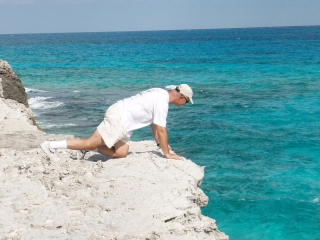 Unfortunately it was not warm enough to snorkel; even with our half wetsuits on we could not get into the water.

Because we were closest to the park office we were visited by the local birds: yellow quits.  The park wardens leave sugar out of the yachties to feed the birds. They have become quite tame and will come right into the boat. They are particularly fond of bananas.

We also had a great view of the beach with the 52 foot sperm whale skeleton.

We decided that it is not warm enough to linger in the Exumas so are heading for GeorgeTown.  It is known as Chicken Harbour by the yachties as this is the turning point for a lot of boats.  You either head south to the Caribbean via the “Thorny Path’ or retreat and go back to the US. 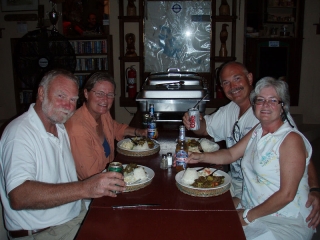 So on January 26th we sailed to Black Point Settlement on Great Guana Cay and then on to Little Farmer’s Cay on the 27th.

There is a small Bahamian community on Little Farmer’s that served us and Robby and Carol from Arete lobster/fish one night then mutton (goat) the next.

We are now in GeorgeTown, anchored 1.5 miles north of the Tropic of Cancer, waiting for a weather window to head south to the Turks and Caicos.

A one day weather window appeared on January 18th so we headed out with about 30 other boats.  Our destination was Allan Cay, home of the “iguana iguana”s.  We also discovered the “conch graveyard” 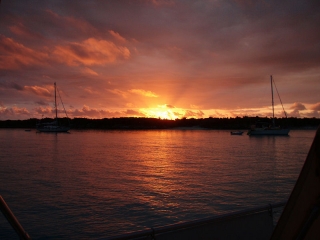 We ended up spending a few extra days at Allan Cay due to the unfavourable winds before sailing down to Norman’s Cay.  We were able to do some snorkeling while we waited for the winds to die down.

We had beautiful sunsets at both places to end our days. 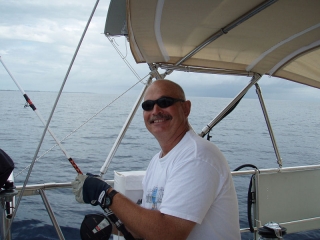 We reluctantly left Chub Cay for Nassau on January 12th.  We had no wind so had to motor the whole way.  It was worth it though when Richard hooked a marlin on our fishing line.  It broke the line but it was the first time that we have hooked a bill fish off our boat.  Look at Richard’s grin!!  I’m not sure if it was from excitement or relief that we didn’t have to try to bring it on board!

Our first view of Nassau was impressive.  The Atlantis Resort on Paradise Island dominates the skyline, unless of course there are cruise ships in the harbour…  The lighthouse in the middle is just for show!

We spent a week in Nassau again waiting for a weather window.  We explored Atlantis, it has a casino, and the various other sites around town.  Richard stopped at the fish market to buy local onions, it cost $5 for 3 of them!  And there was always conch to be had.

We visited the forts used to fend off the pirates.  And of course we went to the Pirate Museum…